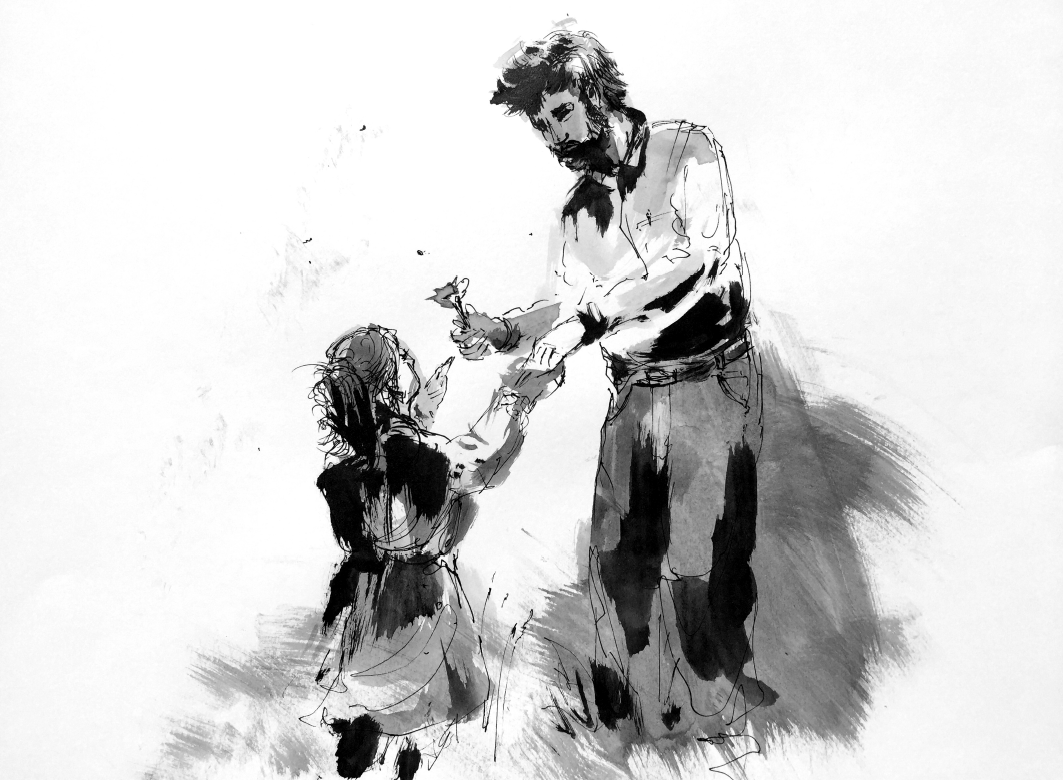 How one woman’s passion project became a beacon of hope in a pollinator-deprived world.

Please note: this back story was finalized and approved prior to the Covid-crisis hitting the world. The actual script, based on this origin / purpose story will obviously take into account these dominant current affairs situation to some extent and in the relevant time references.

About young Beatrice and her father

Dr. Beatrice “Queen Bee” Kukac was born the daughter of Miro Kukac: an avid nature lover and painter. Fascinated by the beauty surrounding him, especially flowers and insects, Miro spent as much time as possible outside, in the grasslands near their family home, with his easel and his sole daughter.

The countless hours of father-daughter-time in their very own ‘garden of eden’ made for memories Beatrice would forever treasure as the happiest moments of her life. And although the young girl inherited her father’s fondness for nature, she was not blessed with his artistic talent. While Miro was busy immortalizing his precious meadow and its inhabitants on paper, Beatrice started collecting, observing and studying them. She would continue to do so until she was well in her teens, so it came as no surprise when she chose to enter the local university’s biology department.

Once graduated and specialized in entomology, Beatrice decided to focus all of her attention on the study of pollinators – the animals she grew up to love and appreciate most since she took her first steps in the family-owned grasslands.

All grown up, Beatrice moved out of the family home to build her own life and career, but she kept coming back every weekend to see her father… and their meadow. They even picked up a new hobby together: beekeeping – combining Miro’s handyman skills and Beatrice’s scientific knowledge. Father and daughter would share both the responsibility for and the honey from the Kukac-hives until Miro died.

On a professional level, Dr. Beatrice Kukac entered the scientific scene at a point where the first signs of pollinators being under threat became visible. Alarmed by data showing a significant decrease in species, Beatrice and her team predicted a worldwide insectpocalypse by the year 2120. A doom scenario that was supported by many a fellow scientist, NGO, research institutions and policy makers worldwide. Still, their collective plea for urgent action in pollinator preservation wasn’t met with the measures they’d hoped for. Especially those in power to actually make a difference on a larger scale seemed to have bigger concerns than tiny insects. The climate crisis, for example, which drove masses to the streets and politicians crazy. While Dr. Kukac’s team wholeheartedly embraced the attention for this other global challenge, they were well aware of the fact that the pollinator as well as the climate crisis were in many ways connected. After all, the rise in temperatures and the decline in pollinator species were symptoms of one and the same problem: man’s broken bond with nature.

Often disappointed, but never discouraged, Dr. Kukac and her team continued their work as advocates for pollinator protection with incessant determination, convinced that every effort was worth the effort.

When Miro Kukac died, in 2018,  he left his only daughter with a broken heart, but also… with a beautiful inheritance: her childhood paradise and all of its natural wealth. She treasured every flower, tree and insect as a last tangible souvenir of her beloved father and nurtured the land as well as the bee colonies they used to share with tireless energy. She swore to honour Miro’s legacy by dedicating the lot and all of her time and resources to the conservation and protection of threatened pollinator species.

To that end, in 2019, Beatrice initiated the construction of a large biodome covering Miro’s meadow. “Project Pollinator Ark”, as she and her team labeled the initiative, was supported by dozens of students and volunteers. Beatrice’s childhood land became the stage of an amazing collective effort to protect the pollinator population from external threats – at least on a small scale.

News of the emerging dome travelled fast and far, and was at times received with brutal criticism, even laughter, in the outside world. “Dome thinking: the superlative degree of doom thinking”, was just one of the headlines featured in the media. And even the president of the United States couldn’t help but scornfully mock the European project when asked about his ambitions regarding biodiversity at a press conference.

Despite some public contempt and criticism, the Pollinator Ark project was at the same time approved and applauded by many like minded scientists and institutions. Support and funding grew, and so did the ambitions of Dr. Kukac’s pioneering team.  Beatrice even resigned from the university where she had been teaching for years and decided to focus all of her time on the further development of her very own Pollinator Ark.

In the following years, she gradually expanded her team and the Ark, whenever resources allowed her to. First, she moved their office to a custom lab, Studio B, right next to her father’s meadow. In 2024, she purchased the adjacent farmland using the money she earned through the sale of her parental home, as it would make an excellent case study of the correlation between pollinators and food production.

And after another significant donation, she invested in the foundation of “The Garden Lab”, intended to study the impact of current gardening trends on the pollinator population.

When construction of the garden lab was finished, in 2030, she invited her investors for a tour. As the group explored the site and Beatrice’s first research, they were highly impressed and complimented her team on the progress made. “If only the rest of the world could see what’s going on, then maybe some actual progress could be made”, Beatrice sighed. To which one of her guests carefully suggested “well, they could… if you’d open up this place to the public”.

From personal ark to public park

Beatrice was initially repelled at the thought of crowds flooding her Pollinator Ark, the scene of her childhood. Until she suddenly remembered a Benjamin Franklin quote on the kitchen wall of her parental home: “Watch the little things. A small leak will sink a great ship”.  Her father used that same kitchen wall to display his many drawings, so overtime the quote got completely covered with water coloured insects. Which actually “made it even more meaningful”, her father wisely noted while he covered the last word with a hoverfly sketch.

The moment Beatrice thought back of this art-covered kitchen wisdom, she began to realize that she could pay her father no greater tribute than spreading their shared love for pollinating insects with the world. Even if this meant opening up “their world” to the public, in order to amaze and familiarize people with the incredible beauty and vital importance of pollinators. This specific memory, along with the incredible enthusiasm of her team -who were like family to her- won her over. It was time.

Even more, time was running out, because the world around her sacred dome was rapidly running out of pollinators. A great ship was sinking indeed, and only few people seemed to care about the little things. Sure, some measures were taken: worldwide, hand pollination was advertised as a solution to both unemployment and the decrease in wild pollinators. Ambitious start-ups experimented with massive drone pollination of crops and the profession of beekeeper saw a massive growth. But every somewhat informed human being -scientist or not-  knew these efforts were insufficient as a plan B to sustain worldwide ecosystems and food production, which were under serious threat following the rapid decrease of wild pollinators.

In a joint effort, team Kukac worked day and night to prepare for the public future of their project. They applied for funding, convinced investors and drew blueprints for “Pollinator Park”. In February 2035, they finally received the official approval for public exploitation of the park. The last hurdle was taken, and it was a day of great euphoria. The next day… not so much. Beatrice had been feeling under the weather for weeks, blaming it on stress and lack of sleep. But a doctor’s visit resulted in a far more serious diagnosis and an uncertain future. In the following years, her health became an ongoing struggle. Her team lovingly took care of their “Queen Bee” and continued working their asses off to make Pollinator Park a reality. Their continuous support, both on a personal and a professional level, would be rewarded with Beatrice officially signing over “her” Pollinator Park to the team.

In her will, she trusted her loyal Studio B-employees with the further development of Pollinator Park as a “paradise lost” for future generations to be amazed by the beauty of nature as it was,  and inspire them to take actions in order to save what’s left of it in the outside world.

Beatrice’s only non-negotiable condition was that the park wouldn’t open its doors until after her death. She didn’t want to be around when the first strangers entered the sacred grounds that once belonged to her father.

The grand opening of Pollinator Park

Once Pollinator Park finally opened its doors to the public in 2050, the sad truth was that the park was not only an in-memoriam for Beatrice, but also for half of the world’s pollinator population. By this time, the park domes that were once a curiosity, were now a wildly copied reality.  In the past decade, similar biodomes had been springing up like mushrooms. Some were an attempt to create green oases in an increasingly barren world, some were built for food production or research purposes.

At this point, almost 50% of the many pollinator species had already been declared extinct and the consequences were tangible in many aspects of everyday life. In mankind’s diet, that gradually became as bland and colourless as the world surrounding us. In global health, with malnutrition and viruses spreading rapidly. And in the supermarket shelves, where former daily nutrients became luxury products and overall food prices were skyrocketing. The price mankind paid for its lack of action was high and would only increase as we rapidly approached the point-of-no-pollinator-return.

Luckily, there was still some hope. Hope to open eyes and initiate a chain reaction of actual change. And that hope was to be found in a wonderful place called “Pollinator Park”.